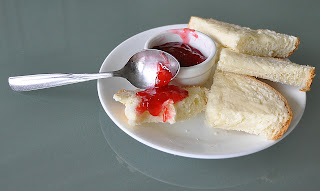 In the years after the Second World War, convenience foods were heralded as the greatest benefit ever to arrive in the home kitchen.  After the deprivations and shortages of the war years, it must have seemed miraculous to open a tin or package and find all the ingredients needed to make a meal.  So quick!  So simple!  And at the time, this food was also believed to be both wholesome and nutritious.
The homemaker of the 1950’s had some unexpected hurdles to deal with.  It was a time of great social change with widespread emphasis on modern science as a beacon of hope for the future.  Anything modern or new or “space age” was greeted with great enthusiasm.  At the same time, the economy was in a recession that continued until nearly the end of the decade.
With many homemakers struggling to make ends meet, convenience foods took on a special glamour.  Cooking with convenience foods implied that you had the luxury to choose ease over affordability.
The jam recipe I’m going to share with you today originated some time during that post-war convenience food craze.  It’s made with fruit flavoured gelatin dessert powder instead of with pectin and it yields a smaller batch than most traditional jam recipes.  It relies upon refrigeration for preservation, rather than canning.
This was the first jam I ever made, I think because—having never made preserves of any sort—I found the ingredients and cooking methods less intimidating than more traditional recipes.  That first batch turned out very well.  It had a nice texture, with pieces of rhubarb throughout, and a bright, pleasing flavour.
I’ve made this jam many times since and it’s worked perfectly every time.  To this day, it remains one of my favourite spreads.
If you’d like to make Rhubarb Berry Jam, you’ll need: 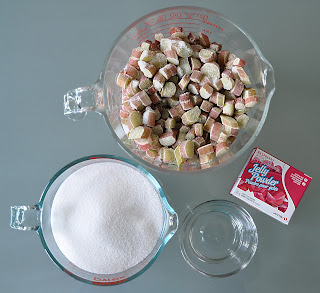 In a large enameled or stainless steel pot, combine the rhubarb, sugar, and water.  Stir to distribute the sugar through the fruit. 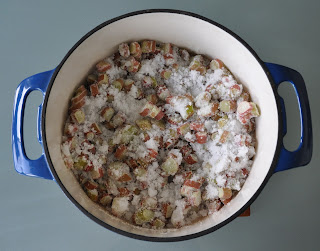 Cook and stir over high heat until the sugar is dissolved and the mixture comes to a boil.  Reduce the heat to medium.  Boil the rhubarb, stirring to prevent scorching, until the mixture begins to thicken; 12 to 15 minutes. 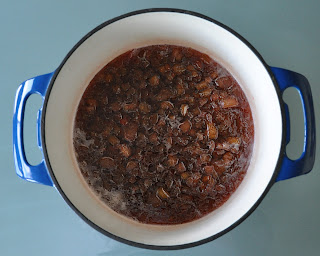 Remove the pot from the heat and sprinkle the gelatin mixture over the top of the fruit. 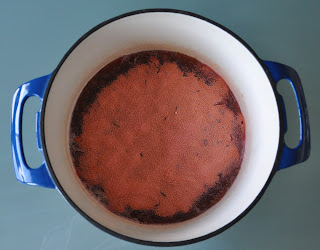 Stir the gelatin into the rhubarb for about 3 minutes, until it’s mixed through and the gelatin is completely dissolved. 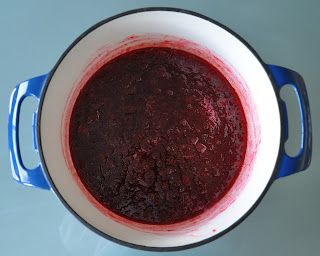 Ladle the jam into sterilized jars (you’ll have about 2-1/2 pints), cap the jars, and allow them cool to room temperature. 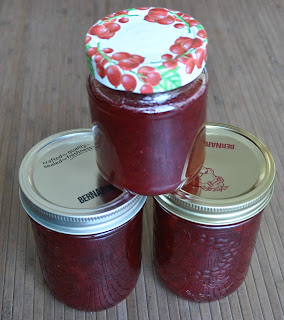 Store the jam in the refrigerator and use it within one month.  If you keep it longer than that, it’ll get very thick.

Rhubarb makes great jam. I think it might be high in pectin. But I might be wrong. GREG

It does make great jam Greg. It's not high in pectin but breaks down to make a fairly thick consistency.

I like stewed rhubarb too (cooked like applesauce). It's a wonderful early spring fruit and very high in Vitamin C.

Yum! I've always wanted to make my own jam! I would love for you to link it up to my Recipe Party at The Sweet Spot.

Thank you for your invitation. :) I've linked my recipe to your party. Thanks for hosting. I've found lots of good ideas there.