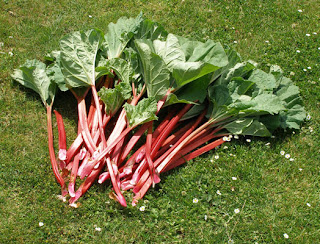 I've seen several rhubarb recipes on Pinterest recently, probably because Valentines Day is at hand and dishes cooked with rhubarb are often a lovely blushing pink colour.  There are, of course, also recipes using cherries and raspberries, but both of them are even more out of season than rhubarb is.

It'll be about three months before we see rhubarb in our local gardens but I have noticed it in the produce aisle lately.  I don't remember where it was imported from but I do remember the price, which was far higher than what I can afford to pay.  Fortunately, I still have some of last spring's rhubarb in the freezer.

Rhubarb makes a frequent appearance on our table.  Both my husband and I enjoy its tart flavour and appreciate its nutritional benefits--so much so that I was going to write a blog about rhubarb tonight.

Then I remembered that I'd already written one, last spring.

(Embarrassed blush here. I have a good memory, but it's short.  ;^)

I'll be sharing one of my favourite rhubarb jam recipes with you later this week.  In the meantime, you can find last spring's rhubarb post here.
Posted by Aunt B at 23:47