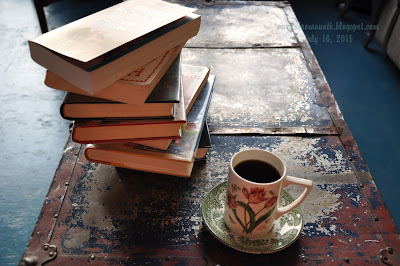 Some mornings I am completely seduced by the allure of reading.  The "to do" list written prominently on the blackboard by my kitchen clamours for my attention, but I ignore it.  Healthy Me tugs at my conscience, whispering in my ear that I should really go for a walk, but I pretend not to hear her.  Instead, I stay in my pyjamas, brew a pot of coffee, and settle in to read.
I'm book-wealthy just now, having made a trip to the library this week and then been given books as well, and this morning their siren call was impossible to ignore.  I curled up on the couch, plucked the first book from the top of the pile and settled in, dividing my attention between my book and the sunrise scene coming into view outside my front window.
The novel, a detective mystery, was action-filled and interesting, busy with sinister villains and a complicated plot.
The sunrise was exactly the opposite.
The sky grew paler at its edges and then began to blush. faint pink spreading upwards from the hilltops. It caught the trails of cloud just above, and deepened into something altogether different - a vivid fuschia limned at the bottom with an edge of glowing phosphorus - then continued its gradual flow of colour across the sphere above.
The book drew me back again.  The family dogs, stolen by the villain's henchmen, were in danger.  Would they survive?
I read on until the changing light once again drew my eyes from the page.  The view from the window was magical:  the clouds had gathered together to form a few tall cumulus stacks - orange shadowed with lavender grey - that sailed upon a sea of pink and mauve.
As transitory as a single breath, the colour in the sky began to fade, not disappearing so much as growing quiet. The clouds settled into shades of peach and grey, the blush behind them receding, giving way to the palest, most delicate of blues.  Peach faded to yellow, then brightened to white, and the sun, having made its appearance above the shoulder of the hill, shone directly in my window.
On the power lines across the street, a crowd of raucous crows shouted their morning news across the neighbourhood while a covey of mourning doves in the tree beside my balcony hoo-hoooed a gentler good morning to each other.
A breeze came dancing down the street, ruffling leaves as it passed my way, and in its wake the neighbourhood woke up.
The ginger cat who owns the family across the street climbed onto the roof, arranged itself so it could drape front paws and head over the edge, then settled in to watch its humans enjoy coffee on the steps just below.
Two women, with the serious stride of those who walk for exercise, strode along the pavement discussing their plans for the day.
The first city bus of the day went by, mostly empty, a few seats occupied by still-sleepy passengers leaning their heads against the window as they nodded their way towards their destinations.
An old man walked a tiny, perfectly groomed white dog towards the park, pausing patiently every few feet to allow his small friend to sniff fence posts and shrubs.  Both took their time; the man gazing at the scenery around him, the dog gathering news of other pets who'd passed this way before him.
My heart, quieted by the peaceful scene outside, told my spirit that all was right with the world, then urged me back to bed. I set the book aside, - heroes and villains could wait a while - tucked myself in, and drifted back to sleep.
However your day has begun today - busy or quiet or some balance between the two - and whatever your plans may be, I hope you find a peaceful moment in which to enjoy the gifts it brings you, and to shelter in the calm.  Have a joyful Thursday.
﻿ 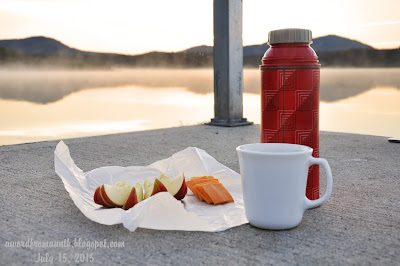 I woke well before dawn this morning, the stars still bright in the arching cobalt bowl above, the air blessedly cool, and decided to watch the sunrise from one of my favourite spots at the lake.  I quickly dressed, filled my backpack with breakfast and camera, and set out to walk there.

The streets - usually loud and busy in my neighbourhood - were quiet.  Only the occasional car whisked by. Here and there along the way, yellow light spilled out from kitchen windows: early risers preparing for the day.

By the time I'd left the houses behind to walk along the edges of the marsh, the first blush of morning had appeared above the hills to the east and the chorus of birds that each day announces the coming of dawn was in full voice.  Hidden among the low bushes, scrubby trees, and tall golden grass that are the marsh this drought-y summer, they made their presence known in a volume that only sheer numbers can bring, each tiny set of lungs filling with the morning air and exhaling song upon the softness of the breeze.

When I reached the lake the sky was lightening, scarfed with wispy cloud, and tinged with pale blue, peach, and butter yellow, all reflected on the water, the edges of the landscape blurred by rising mist.

I unpacked my breakfast, poured my tea, and settled in to watch and listen.

I was surrounded by a choir of frogs.  From their seats among the lily pads their voices rose together, discordant, ranging from high pitched ribbits to something as unmelodic as the twanging of a rubber band; all matched in their enthusiasm for this morning conversation.

Fish rose for the morning bite, an occasional flash of silver above the misted water; more often a quiet "plop," leaving concentric ripples in its wake.  A kingfisher, perched on the railing nearby, watched them intently before diving to pluck his breakfast from just beneath the shining surface of the lake.

Two otters surfaced just beyond the edge of the lilies, and regarded me with curiosity.  Then, having decided I was not a threat, swam by and climbed onto the shore, disappearing lightning-quick into the thicket of willow that overhangs the water's edge.

A heron, resting unnoticed on the nearby trestle, took wing and passed not six feet overhead, the creamy-yellow undersides of his wings glowing in the not-quite-sunrise light.

And still we sat, the chorusing birds, the choir of frogs, and I, to greet the sun as it rose above the blue hills to the east.
Posted by Aunt B at 07:37 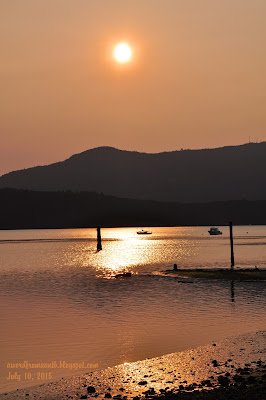 I've traveled the road to the bay so many times it is as familiar to me as breathing and yet, still, each time I wend my way along it, it offers me new gifts.

Today the roadsides are cottage gardens. A tangle of blackberries and wild morning glory form the hedge, the bright white trumpets of the morning glory flowers turning their faces to the sun while beside them clusters of berries ripen in various stages, acid green, and red, and deep almost-black purple all found together in each single cluster.  In front of the tangle, expanses of tall golden grass are trimmed with roundels of white Queen Anne's lace dancing in the morning breeze, while magenta vetch, ragged blue chicory, and tall clumps of bright yellow tansy crowd up against the edges of the pavement.

Here and there, accidental fruit trees grow, sewn by birds or by careless passers-by who've tossed away their apple cores or plum pits and left them there to grow.  The trees are heavy with fruit now, their newest branches so laden that they bend like bows, arching towards the grass below.  Small green apples, thumb sized pears, clusters of bright red plums hanging like grapes among burgundy red leaves all promise abundance in the months to come.

Our unusual weather has caused many forest fires and the sky is hazed with smoke.  It's a worry but - as with everything in nature - the smoke brings its own gifts too.  The skies both morning and evening are intensely coloured, and the landscape washed with filtered, golden light.

This morning, the newly risen sun washed the sky above the bay with lavender and apricot, reflected in the dancing ripples of the breeze ruffled waters below.

I ate my breakfast picnic at a table in the park and watched the morning unfold:

Barn swallows and purple martins swooped and soared in an intricate dance above the shallows.

Gulls wheeled overhead, uncharacteristically quiet, as if they too were taken in by the morning's majesty.

Small brown rabbits peeked at me from the edges of the undergrowth and then, when I'd been still for long enough, ventured out onto the grass to continue with their morning meal before fading silently into the shadows once again as an eagle swept by overhead.

The eagle, for one single, breathless moment, hung perfectly silhouetted against the pastel sky, great wings outstretched in flight so seeming effortless I was surprised by how quickly it was gone.

A single fish jumped in the deeper water, the circular ripples left by its course making a contrasting pattern on the satin surface of the bay.

A heron stood across the way, perfectly still, a totem to patience and calm planted at the water's edge.

The village had not yet stirred.  There were no human voices, no passing cars to mar the perfect quiet of the moment.

Peace settled itself on my shoulders like a blanket.

My breathing slowed.  My heartbeat calmed.

I made my way home slowly along the winding road.

I wish you a happy day today.  Whatever it may bring you, I hope you find a quiet moment or two to enjoy the beauty that surrounds you.  Open this Friday like a gift, enjoying both the wonder of its wrapping and the worth of the treasures found within.
Posted by Aunt B at 08:37