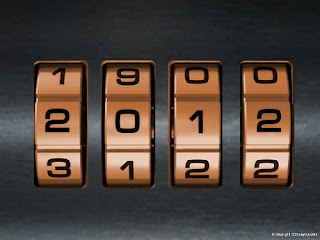 My friend Heath put a post on his Facebook wall yesterday that said “Happy Arbitrary Point in Time.  New Year's Day used to be observed around the Vernal Equinox (March 20th or March 21st.)  In 1582, Pope Gregory XIII ordered a new calendar (the Gregorian Calendar) to replace the old Julian Calendar. This new calendar called for New Year's Day to be celebrated Jan. 1.”

Heath’s post got me thinking about calendars in general and about the history of the calendar as we know it here and now.
Did you know that our calendar has its roots in ancient Egypt?  Many other ancient cultures based their calendars upon the phases of the moon but Egypt based hers upon the seasons and, thus, upon the sun.
Egypt was one of the first great farming civilizations and its well being was dependent upon the Nile river’s cycle of flooding.  These great floods brought water and rich silt to the flood plains, enabling Egyptians to grow the crops upon which their civilization was built.
The Egyptian year was 365 days long.  Their calendar had 12 months of 30 days each, plus 5 extra days that were given over to celebrating the greatest gods in their pantheon.  Until the time of Julius Caesar, it was the only calendar in the ancient world whose months and years were fixed by rule instead of being left to the determinations of priests and astronomers.
Egyptians didn't adjust the length of their year with leap years as we do now.  Instead they accepted that the seasons would appear later in the year each year, on a cycle of 1460 years.  They checked the relation of their calendar to the natural year by observing the solstices and the first sighting each year of Sirius, the dog star, as it appeared in the morning sky just before sunrise.
Unlike the Egyptians, the ancient Romans observed a lunar calendar.  There were 12 months in their calendar too—Martius, Aprilis, Maia, Junius, Quintilis, Sextilis, September, October, November, December, Januarius and Februarius— but they also had an extra intercalary month that they inserted into the calendar, at intervals determined by priests, in order to help keep the calendar in step with the seasonal cycle.
There were no hard and fast rules about when an intercalary month should be inserted into the Roman calendar so, by the time Julius Caesar came to power, the calendar had slipped almost 3 months in relation to the seasons.   Caesar reformed the Roman calendar, rejecting the lunar month entirely and adopting a solar year whose average length was 365.25 days.  He introduced the leap year system we still use today, adding one extra day at the end of February (the end of the Roman year), once every four years.
The calendar of Rome had always counted years from the date of the founding of the city by Romulus and Remus in the year we now call 753 B.C.  Around 530 A.D. that changed, when a Christian monk—Dionysius Exiguus—determined what he believed to be the date of Christ’s birth.  His calculation gave the world the system of numbering still used today.

In 1582 there was another great calendar reform.  The Julian calendar calculated the length of an average year to be 365.25 days but that’s 11 minutes and 15 seconds longer than the true length of the tropical year.  After only 128 years, those extra minutes added up to an entire day.  Every 128 years, the year began a whole day earlier.
In order to correct the discrepancy between the Julian calendar and the tropical calendar, Pope Gregory XIII undertook a reform that had three parts:
He restored the spring equinox to March 21, omitting 10 days from the calendar in 1582.
He omitted 3 leap years every 400 years.  A century year would no longer be a leap year unless it was divisible by 400 years.  This correction means that no further calendar reform will be required until the 49th century A.D.! [i]
He also decreed that the New Year would begin on January 1, instead of in March as it had done since Roman times.  (Not everyone readily accepted this change.  England didn’t adopt the Gregorian calendar into law until 1751.  Prior to that date, they continued to observe the New Year on March 25.)
The Gregorian calendar has been in general use for so long that we rarely question the tradition of marking the New Year on January 1.  As my friend Heath observed though, it is indeed an arbitrary date.  We must remember too that it’s our arbitrary date.  There are about 40 different calendars in use around the world and their New Year celebrations fall on different dates from our own.
Still, the common theme of calendar making for all human-kind is the desire to organize units of time to satisfy the needs and preoccupations of society.  In addition to serving practical purposes, the process of organization provides a sense, however illusory, of understanding and controlling time itself.  Thus calendars serve as a link between mankind and the cosmos. [2]

Perhaps this is why our New Years celebrations—whenever they take place—are so important to us.   What could be more worth celebrating than a link to the cosmos?