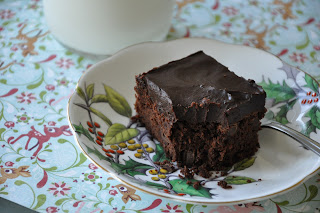 The other day I was scanning through Pinterest and came across a pin for chocolate dipped jalapeños.  The first question that popped into my mind was “Why?”  Not that I don’t love chocolate—I do—but I guess I like my chocolate in more traditional ways.  Like brownies.  I do love a really good brownie.
I’m sharing my very favourite brownie recipe with you today.  I don’t make them often because this much chocolate just doesn’t fit readily into my budget, and that’s probably a good thing.  If I had these brownies in the house all the time, I’d weigh 300 pounds.  As a once in a while indulgence, though, they really can’t be beat, and—because they’re super rich—a panful goes a long way.
My favourite brownie is made with cocoa, and chocolate chips, and semi-sweet chocolate ganache: A whopping pound and a half of chocolate in total (not counting the cocoa).  But it’s Christmas-time, right?  You’ll share with your friends.  I’m sure they’ll appreciate some chocolate lovin’ too.
Here’s how to make them.  For the brownies, you’ll need: 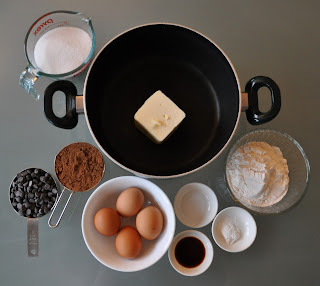 Mix together the flour, baking powder and salt.
Melt the butter in a large saucepan.  Remove the pan from the heat and sift in the cocoa.  Stir until the cocoa is dissolved into the butter.  Mix in the sugar.  Add the eggs one at a time, beating after each addition.  Stir in the vanilla. 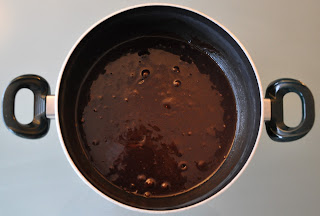 Blend in the dry ingredients, then stir in the chocolate chips. 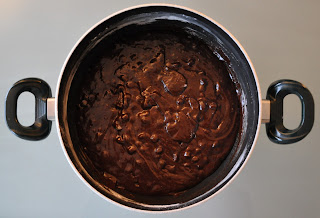 Pour the batter into a greased 13 x 9 x 2 inch pan, and bake in a 350ºF oven for 30 to 35 minutes.  Unlike many brownie recipes where the batter in the middle of the pan should be slightly under-done, you’ll want this cooked to the point where a knife inserted in the center of the brownie comes out clean.  Allow the brownie to cool completely. 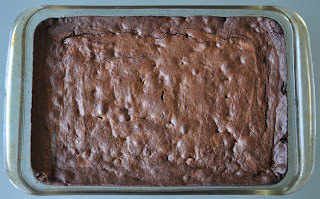 When the brownie has cooled, make the ganache.  You’ll need: 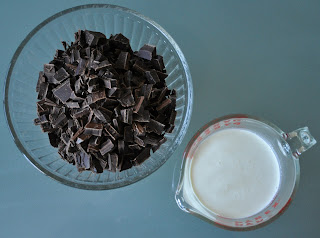 Heat the cream until it is hot but not quite boiling.  Pour it over the chopped chocolate. 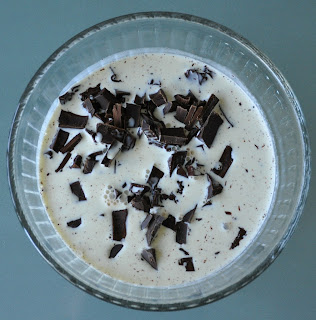 Stir until the chocolate is completely melted.
Pour the ganache onto the top of the cooled brownie and spread it so that it’s an even thickness.  If you want to, you can make some decorative swirls with the back of your spoon. 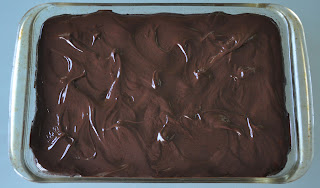 Allow the ganache to cool and set.  It’ll lose its sheen but it won’t harden completely.  It’ll be the consistency of a good truffle.  This will take some hours.  I usually let it set overnight.
Once the ganache has set, trim the edges off the brownie.  The edges of the brownie are cooked more than the center so they’ll be a little bit dry and crumbly. Trimming them makes a better presentation.  Don’t throw them out though.  Tomorrow I’ll show you something you can make from them. 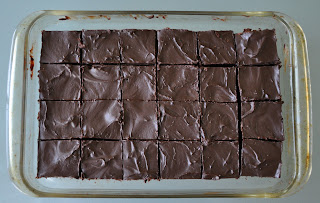 This post is linked to Think Pink Sundays, hosted by Flamingo Toes and to Made by You Mondays hosted by Skip to My Lou.

I've never had ganache on my brownies before but it looks very sweet. I can see why it would be costly and why you would only want it once in a while. Mr.CBB

The sweetness of the ganache actually depends upon the type of chocolate you choose. I like semisweet or bittersweet. Both have a deep chocolate taste without being tooth-achingly sweet like milk chocolate would be.