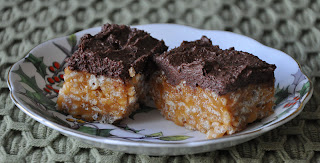 This recipe originated in Jean Paré’s book, “Company’s Coming; 150 Delicious Cookies and Squares.”  Mrs. Paré is something of a phenomenon here in Canada, having published a whole series of cookbooks, but I’m not usually one of her fans.  I find her recipes are often cloyingly sweet, and she calls for a lot of convenience food that I just don’t keep on hand.
I have a friend who holds a different opinion.  She's a huge fan of the "Company's Coming" series and has all of Mrs. Paré's cookbooks.  She urged me to try this particular recipe, and even went so far as to copy it out and mail it to me.  I’d been told repeatedly—and by a number of different people—that these Peanut Krispie Squares are very good so, when the recipe came in the mail, I decided to give it a try.
I made the squares exactly as directed in the recipe.  My husband loved them. I thought they were okay, but not brilliant.  I do think, though, that if you “grow them up” a little bit by making a couple of changes, they have the potential to be something truly delicious.
Here's the recipe just as I made it the first time, together with my notes on how I might change it.   Please do read all the way through and then make your own choices about what to include.
To make Peanut Krispie Squares, you’ll need: 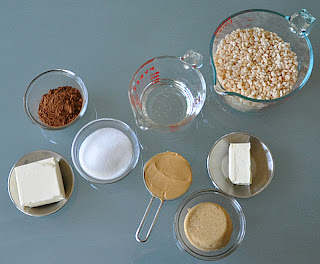 Heat the peanut butter, corn syrup, sugar, and butter in a saucepan over low heat.  Stir as you heat it.
Pour the hot mixture over Rice Krispies and stir well to coat the cereal evenly.  Press the cereal mixture into a greased 8 x 8 inch pan.
Frost the squares with an icing made from:
Combine the 3 ingredients in a small sauce pan.  Heat and stir until melted and dissolved.  Chill to spreading consistency and then spread over the bars.  Chill again until the icing is set, then cut the square into serving sized pieces.
Notes:
Substituting 1 cup of salted, roasted peanuts for 1 cup of the Rice Krispies will add a salty counterpoint and some extra crunch to this sweet bar.
I found that the granulated sugar didn't dissolve well in the icing, resulting in an unpleasant grainy texture and, while the icing was not too sweet, the butter tended to separate into a layer on the top as the icing cooled.   It would probably be worthwhile to use icing sugar (powdered sugar) instead, or to replace the icing with ganache.
To make ganache, chop 8 ounces of bittersweet or semisweet chocolate.  Place it in a heat proof bowl.  Heat  3/4 cup  of cream to a simmer—not a boil—and pour it over the chopped chocolate.  Stir until the chocolate dissolves.
If you use ganache, spread it over the top of the cereal mixture and let it cool at room temperature.  It’ll set to a firmer consistency but won’t harden completely.
While the icing or ganache is still soft, I would garnish the squares by sprinkling a few more  chopped salted, roasted peanuts over the top.
Posted by Aunt B at 18:16