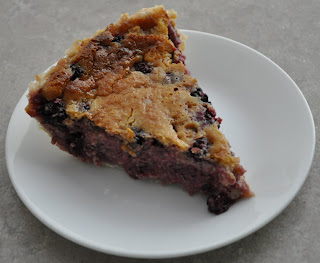 Every year, with the first picking of blackberries, I make a blackberry sour cream pie.  It’s not the prettiest girl at the dance, but it tastes glorious.  We love it.  I make it but once a year and my husband anticipates it from the time he sees the early berries, still hard and green on the vine.
My blackberry sour cream pie is adapted from a traditional Mennonite recipe found in Edna Staebler’s book, Food That Really Schmecks.  Edna used raisins in her pie but I think the rich, caramel filling calls out for something tart; blackberries, rhubarb, or even tart apples make this a more appealing pie to me.
It’s a simple recipe, made from readily available ingredients.  To make it you will need:
You will need to blind bake your crust before you add the filling.  Don’t pierce it with a fork before you do this; the filling will leak through the holes and make a soggy mess.  Instead, fit foil snugly into the formed pastry and then cover the foil with a layer of dried beans.  Bake the foil covered pie shell at 425 degrees for about 12 minutes.
Once you have baked the crust and removed it from the oven, reduce the oven temperature to 400 degrees.
Remove the beans and the foil from inside the pie crust.  Save the beans.  You can’t use them in recipes but they’ll come in handy the next time you need to bake off an empty pie crust.
While the crust is cooling, make your filling:  Combine the sour cream, brown sugar, eggs, vanilla extract, and salt, whisking them together until they are well combined.
Put the drained blackberries in the pie crust, arranging them so they are evenly distributed, and then pour the sour cream mixture over the berries.  Place the pie on the middle rack in your oven and place a baking sheet under it to catch any drips.  Bake the pie at 400 degrees for 10 minutes, then lower the oven temperature to 350 degrees and continue baking until the custard has set.  This often takes an hour, sometimes even more.
You’ll know the pie is done when you can insert a thin knife into the center and it comes out clean.  The pie will be quite puffy at this point and its center a little jiggly.  The filling will settle as the pie cools.
Chill the pie before serving it.  If you want to, you can top it with whipped cream but it’s not really necessary.  This pie is grand just as it is.
Posted by Aunt B at 10:39

Please do let me know how it turns out...I've always liked the tang the sour cream gives it. It makes a good counterpoint to the sweetness of the brown sugar. I'll be interested to know if the yogurt gives it the same edge.