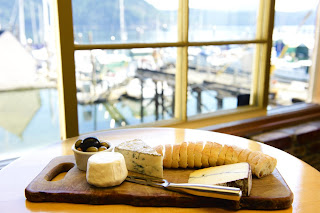 There was a time when all cheese was artisanal cheese.  Every village or farm that had access to cattle, sheep, goats, yaks, buffalo or other milk bearing creatures had a cheese maker.  Every farm wife knew how to make fresh cheese.  Cheese was a local product, made from local ingredients, by local people.  Then, somewhere along the way, cheese making was industrialized.  It became increasingly the province of huge companies like Kraft, made in vast stainless steel vats, and with the rise of the supermarket became the only cheese many North Americans have known.  Thankfully, that’s changing.
Since the rise of the back to the earth movement of the 70’s, artisanal cheeses have been making a recovery.  Now, many communities are fortunate enough to have access to one or more regional cheeses.  This is how it should be.
Here in the Cowichan Valley, artisanal cheese is made by Hilary and Patty Abbott, owners of Hilary’s Cheese.  Since 2001, they have been making cows’ and goats’ milk cheese and selling it in their deli in Cowichan Bay.  They also sell their cheeses at the local farm market, their new store in Victoria, and in shops and restaurants on the rest of Vancouver Island, in the lower mainland, and Whistler.
Cowichan Valley’s climate is mild, with ample rain, a combination that provides plenty of high quality forage for goats and cattle.  Our local milks are of very good quality and Hilary’s Cheese uses these milks to make small batches of cheese each week.  They offer twelve different cheeses, which fall into four basic groups:  fresh cheeses, cheeses whose rinds are washed in Cherry Point Solera (blackberry dessert wine), blue cheeses, and white bloom cheeses that are similar to brie or camembert.  I’ve tried them all.
I still buy supermarket cheeses but our local cheeses are increasingly finding pride of place in my refrigerator.  Right now, my fridge contains some Hilary’s chevre, some Red Dawn (one of their washed rind cheeses), and a small piece of You Boo Blue (humourously named for Youbou, a local community on Cowichan Lake).
My cousin Lyne inspired me to use Hillary’s chevre on a goat cheese and garlic scape pizza. It was so good I plan to make another.
We often end our meals with a fruit and cheese plate that includes Red Dawn cheese.
The piece of You Boo Blue was much larger when I bought it but a good portion of it went into a heavenly risotto this week.
I’m very grateful to have access to such wonderful locally made cheese and I encourage you to check out cheese makers in your community.  They can introduce you to wonderful flavours that are truly a taste of home.
Photo: syscovictoria.com
Posted by Aunt B at 20:33