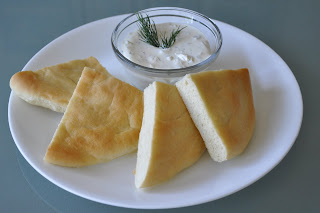 A friend and I went to lunch at the bistro at Merridale Ciderworks the other day.  We saw feta tzatziki on the menu.  It sounded wonderful and, since neither of us wanted a big meal, that’s what we ordered.  Sadly, the actual dish was disappointing.  The tzatziki was runny and the feta—instead of being incorporated with the yogurt—floated in chunks in the watery dip.
I usually enjoy the food at Merridale so I was surprised by the runny tzatziki.  It had all the right ingredients but they just weren’t put together in the right way.  I took the idea home with me and tinkered until I came up with something I liked better.  Here’s how I made it:
I peeled two cucumbers and seeded them.  I don’t care for long shreds of cucumber in my tzatziki so, instead of grating them, I cut the cucumbers into a very fine dice.  I put the finely diced cucumber in a sieve, salted it generously, and then tossed the cucumber with my fingers in order to distribute the salt throughout.  I set the sieve over a bowl and left the cucumber to drain for a couple of hours.
When the cucumber had drained, I got out my blender.  I put a cup of Greek yogurt in it together with a cup of crumbled feta cheese.  (I crumbled it myself from feta in brine.  Don’t buy the already crumbled pieces in a bag.  They’re too dry.)  The ingredients were too thick to puree readily so I added a couple of tablespoons of buttermilk and blended them smooth.
I crumbled another cup of feta onto a dinner plate and added a teaspoon of lemon juice and a tablespoon of olive oil.  I mashed this mixture with a fork until the feta was broken up into small crumbs.
Next, I transferred the blended mixture and the mashed feta to a large bowl and added another cup of Greek yogurt.  I mixed these ingredients until they were well combined. I squeezed the cucumber with my hands to remove as much moisture as possible and stirred it in too.  I added a couple of teaspoons of finely chopped fresh dill and half a teaspoon of dried oregano.  I tasted the mixture and added a bit of salt. (Not much. Feta is quite salty on its own.)
I covered the bowl and put my tzatziki in the fridge for a couple of hours so the flavours could meld.
The flatbreads and pitas in the grocery store didn’t look appetizing to me so I made some thin rounds of plain foccaccia bread myself.  Just before I served the tzatziki, I brushed my foccaccia rounds with olive oil and heated them on the grill.  They made a perfect accompaniment to the dip.
I’m pleased with the way this recipe turned out.  It’s slow to make but you’re not standing over it every minute, and the end result is worth the time invested.  I hope you enjoy it too.
Posted by Aunt B at 22:06

Sounds good. I always drain my yogurt first. I just put it in a coffee filter in a strainer (or line the strainer with a clean piece of paper towel) and let it sit in the fridge for a couple hours. It's amazing how much liquid drains out and it gives your tzatziki a wonderfully rich texture. I also drain yogurt if I'm using it to make a dip for fruit etc.

I've never made tzatziki, but yours sounds delicious! I'm sorry you didn't enjoy the one you had at the restaurant, but I'm glad it prompted you to make this! Thank you for sharing this post with the Gallery of Favorites.

I do hope you try tzatziki. It's very nutritious and makes a wonderful accompaniment to many dishes. I particularly like it with salmon. As to the unfortunate restaurant experience, it turned out to be a good thing. I'd never have made this recipe otherwise. :)

I have never heard of tztziki before, but I am fascinated! Your recipe sounds delicious - I think I will be serving this as an appetizer at my next party. Thank you for sharing it with the Gallery.

Thank you for providing me with the opportunity to share the recipe. :)