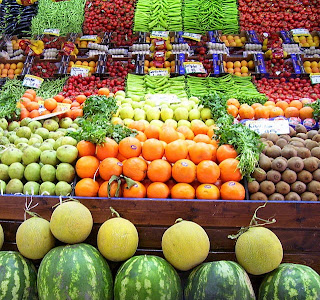 Once, when I returned from a couple of days out of town, my husband bragged to me that in the entire time I was absent he’d eaten nothing that was not brown.  His diet had consisted of bread, peanut butter, cornflakes, fried meat, wieners, and baked beans.  Immediately an old Wendy’s commercial popped into my mind:  The one where the guy justifies his choice of a double hamburger to his salad-eating date by saying “I’m a meatatarian.”
It’s not that my guy refuses to eat fruit and vegetables exactly, more that he refuses to prepare them and is apt to complain if I feed him too many of them in their unadulterated state.  Since I am concerned for his health and my own, it means that meal preparation at our house has, for 30 years, been a game of hide-the-healthy-stuff.
Here are some of the tricks I’ve learned over the years:
Oatmeal is a vehicle for fruit.  I always add raisins to oatmeal.  They’re a very good source of iron.  I also add diced, in-season fresh fruit at the beginning of the cooking time.  This week it was peaches.  In the winter it’s most often diced apple.  I spice the finished dish with cinnamon and add some brown sugar and vanilla yogurt.  It eats like a treat but it’s good for you.
Soup is a good thing.  My fella never complains about vegetables in his soup, and soup affords me the opportunity to add them twice:  First they give their flavours and nutrients to my stock and then, once the stock has been strained, I add more to the finished dish.  I also add legumes in the form of reconstituted dried beans, lentils, or peas.  I add whole grains in the form of barley, brown rice, or whole wheat pasta.
My husband is a huge ramen fan.  Me, not so much.  Those flavouring packages are composed of nothing but artificial flavours, salt and bad-for-you fats.  Over the years I’ve figured out how to make a ramen that is more acceptable to me.  I slice cabbage and onions very finely so that they’re about the same thickness as the ramen noodles.   I grate zucchini and carrots using the fine shred side of my box grater.   I discard the flavouring package from the ramen and cook the vegetables in home made stock.  My target proportion for the finished dish is equal parts vegetables and cooked noodles.  The noodles go in for the last three minutes of cooking, and then the stock is strained off.  I transfer the noodles to a large bowl and dress them with a little toasted sesame oil and some salt and pepper.  My meatatarian sees the carrots but doesn’t even realize the rest of the vegetables are there.   He thinks he’s getting a real treat when I put this on the table for lunch.
Any mom will tell you that you can hide a lot of veggies in spaghetti sauce.  I make my red sauce with tomatoes of course, and onion, garlic, celery, shredded carrot and zucchini, diced bell pepper, pitted and chopped olives.  At various times I’ve also included spinach, and artichoke.  Fortunately I don’t have to hide the vegetables in my red sauce.  After so many years, my guy thinks that all red sauce is made this way.  He does occasionally ask for ground beef in his sauce and, if I have some in the house, I’ll oblige him.  If not, I’ve discovered that I can coarsely grind chickpeas in my food processor and add them instead.  The texture of the chickpeas makes this substitution acceptable to my husband, and the added plant protein and fiber make me happy.
You can get a fussy eater to eat most everything if you wrap it in pastry or bread.  If’ I’m making pastry, I’ll splash out and make some baked pocket pies , but more often I’ll make something resembling a mini calzone.  I’ve made these with white bread, foccaccia, whole wheat bread, and multigrain bread.  My husband prefers the white or foccaccia  bread calzones and I’m willing to concede the point in order to get him to eat his veggies (but I do mix some Fiber Plus into the dough).  I roll the bread dough into thin rounds about 6 inches in diameter and then spoon in a filling.  I’ve used bocconcini and my red spaghetti sauce, cheddar sauce and broccoli (or other green vegetables),  mushrooms, carmelized onion and cream cheese or brie, and even a borscht-like filling made from shredded cabbage, beets and onion bound with sour cream,  tomato paste, and paprika.  I fold the bread dough over to make a half-moon shape , crimp the edges together, let the bread rise, brush it with a little olive oil, and then bake the calzoness off.  I serve them hot out of the oven but my fussy eater will happily consume the leftovers cold, direct from the fridge or reheat them in the microwave.
If he won’t eat it in its original form, my husband will often eat a vegetarian dish presented as a burger.  He’s no fan of black bean chili but if I make the chili into a burger patty by processing it to a coarse grind, adding brown rice and a bread crumb binder, then serve the patty on a burger bun with lettuce, tomato and lots of condiments, he’ll scarf it back.  I’ve made burgers from eggplant, from grilled portabello mushrooms, from falafel, and from lentils.  They’ve all been hits.
Other things that work for me?  Veggie laden pizza, baked eggs on butternut squash or on cooked spinach , fritattas topped with vegetables, scones or muffins with fruit baked right in, topped with more fruit and some yogurt…You get the idea.
To be honest, the hide-the-good-stuff game is fun for me.  I love a challenge, don’t you?

This post is linked to the Gallery of Favorites hosted by The 21st Century Housewife and Premeditated Leftovers, to Kitchen Tips Tuesday by Good (cheap) Eats and Tammy's Recipes, to Guy Food Recipes hosted by Balancing Beauty and Bedlam, to Busy Mondays hosted by A Pinch of Joy and to Trim Down Thursdays hosted by Coping with Frugality and Eco Baby Mama Drama.

These are great tips for feeding your loved ones healthier food! Thanks for sharing this with the Gallery.

Thanks for providing me the opportunity to do so. :)

What excellent ideas! I'm so lucky that both my husband and son are happy to eat vegetables and fruit (my son used to beg me to buy brussels sprouts in the grocery store when he was little - jaws used to drop!). However for anyone who struggles in this area, these ideas will be a Godsend - and I love the idea for ramen - I hate those seasoning packets! Thank you for sharing this excellent post with the Gallery of Favorites.

Lucky you to have a house full of vegetable lovers. :) Thanks for the opportunity to share my post. I appreciate it.

Your about me caught my eye as I clicked over from Bedlam and Beauty -- thumbs up! And love the post -- your hubby is lucky to have you watching his back! Great ideas. I would love it if you would come link up with Busy Monday (open Monday through Thursdays) at A Pinch of Joy, a linky party for ideas that make life better, easier and more fun for everyone!

Thanks Charlene. I'm glad you enjoyed the post. I appreciate the invitation to link up. I'll do that right now. :)

Thanks for linking! Can't wait to see what you have for this week's party!

Thank you Charlene, for hosting. I enjoy your link party. Lots of good inspiration there! :)

This week I linked my "Young Artist Placemats" (http://awordfromauntb.blogspot.com/2012/02/young-artist-placemats.html). I hope you enjoy the tutorial.