A Visit to the Vancouver Aquarium 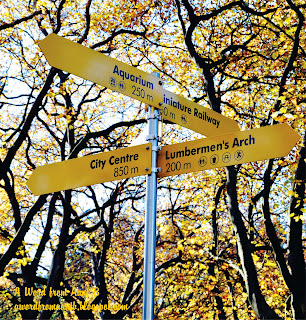 I don't get away much.  That's not meant as a complaint.  It just is what it is.  We live on a tight budget and that means that I stick pretty close to home.

It's no hardship really: Staying close to home doesn't mean my days are not varied, it just means that I rarely venture more than a couple of hours from where I live.  Sometimes, though, I do find myself wishing I could splash out for an adventure further afield, or to a destination that is usually outside the boundaries of my budget.

When I do go on an adventure, those outings become the highlights of my year; very special treats that I enjoy both while I'm there and in memory for months, and even years, later.

My sister treated me to an adventure on my birthday.  I took the ferry to the mainland, she picked me up from the boat, and we visited the Vancouver Aquarium.

The Vancouver aquarium was part of my growing up.  It was opened in 1956 (two years before I was born) and we visited it at least once a year throughout most of my childhood.

In 1967, the aquarium began the first of a series of building additions and exhibit expansions, growing from its 9,000 square foot beginnings to the over 100,000 square feet it is today.  It's the largest aquarium in Canada and one of the five largest in North America.

I love the aquarium.  It's one of my very favourite places.  I'm an intensely visual person and the exhibits are a feast for the eyes. There's always lots of interesting information presented in novel ways, and I always feel I've left having learned something new.

This time much of my learning at the aquarium involved my camera.  I'm trying to improve my low light photography skills, and to learn to better use the manual settings on my camera.

With the low lighting in most of its displays, and the living, moving creatures within the tanks, the aquarium posed quite a challenge to me.  My sister was very patient with me lugging around my tripod, and snapping about a gazillion shots of everything.  I took a lot of photos.  Only a few turned out but I did learn a great deal in the process.

Here are some of my pictures, with a few words of explanation about them.  Click on any image to be taken to a slide show showing the photos in a larger view.

The aquarium has, over the years, become very good at devising exhibits that appeal to, and educate, young children, like these aquarium tunnels for small visitors to walk through. 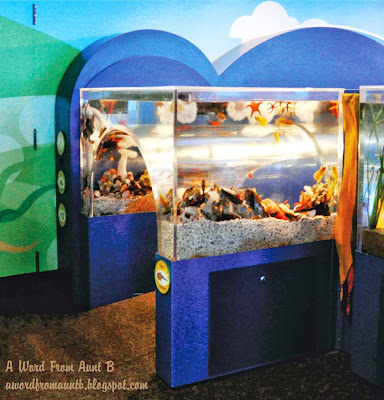 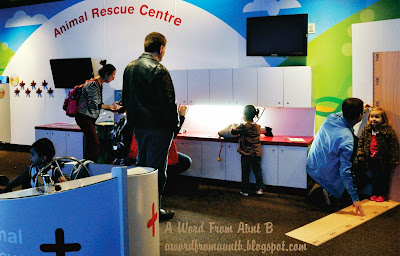 and there are viewing bubbles in several of the aquarium tanks so that young visitors can experience what the exhibits look like from inside.  My sister bravely scrunched her knees on the hard concrete floor to demonstrate this one for us. 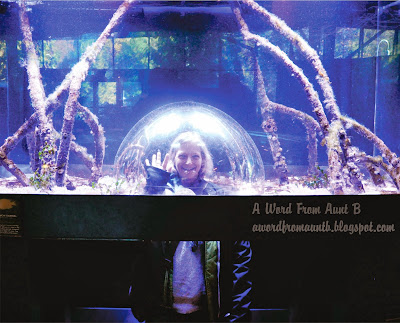 There's a tide pool with actual waves in the main hall of the aquarium.

It's filled with small fish, anemones, sea urchins, and other tidal pool creatures that you can actually reach in and touch. 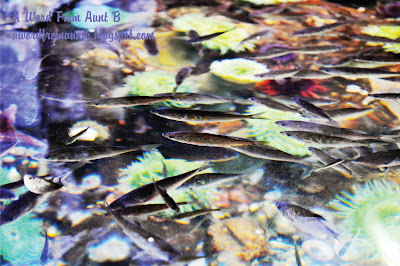 A special exhibit - "Jellyfish Invasion" - was taking place when we visited, featuring huge tanks of jellyfish, from all over the world.  I found them incredibly beautiful.

The jellyfish pictured below is called a Fried Egg Jellyfish.  The name's appropriate to its appearance, and amusing to a food lovin' gal like me.  ;) 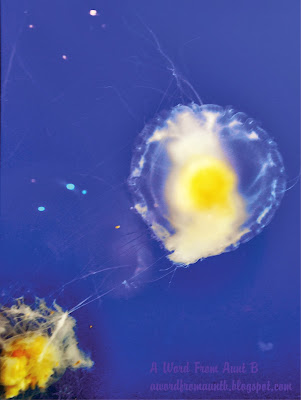 Here are some others I found quite beautiful: 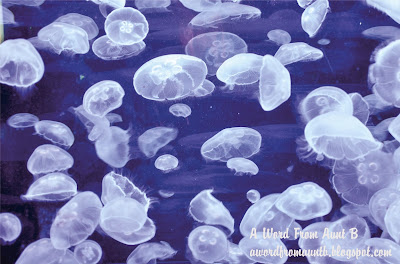 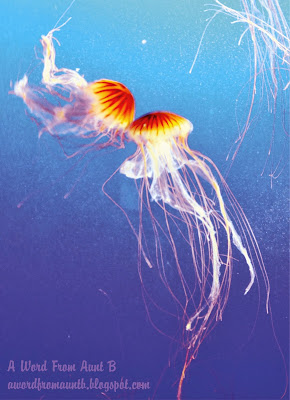 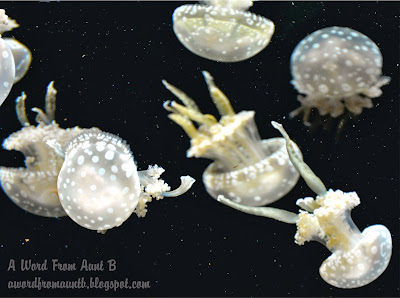 The tropical tanks are filled with colour and motion.  I am always impressed by the gardens of coral they sucessfully maintain in these exhibits. 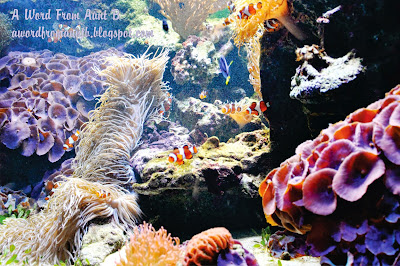 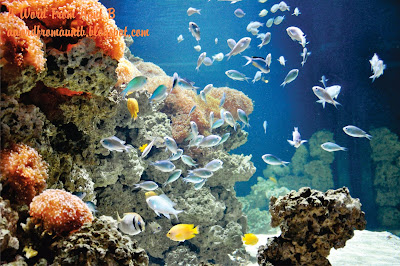 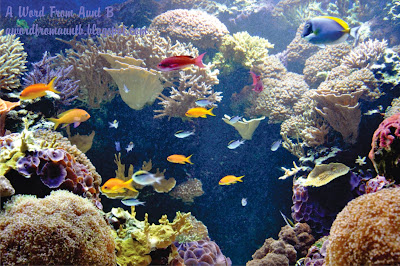 I was amazed by how well camouflaged some creatures were. Can you see the cuttlefish in the photo below?  See how closely he resembles the gravel beneath him? He can change colour.  We held our hands up to the glass of the tank and he changed before our eyes to something very near the same colour as our skin. 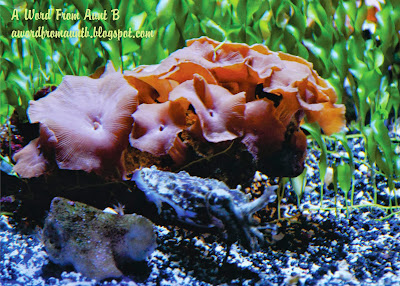 The tank in the next picture had such soft colours I could have gazed at it for hours:  soft pinks and oranges, blue fish, and the most exquisite green seahorses.  I was surprised by how small they are. 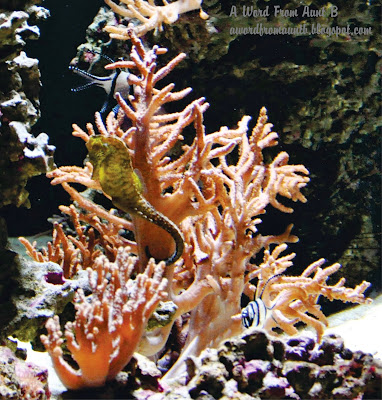 We tend not to think of the cold waters in our area as being home to colourful creatures like those in the tropics, but look at these guys. 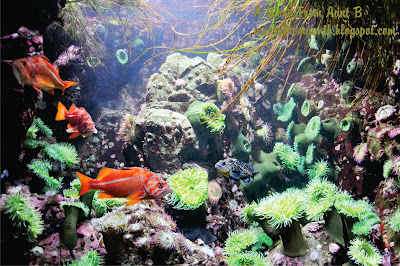 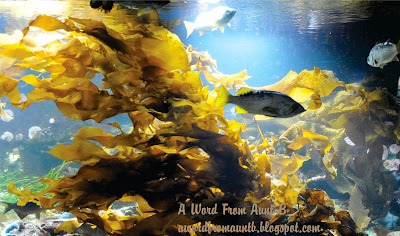 The Amazon exhibit is a combination of forest canopy and water exhibits. 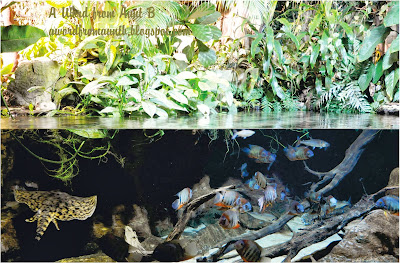 The cayman lizards were so still we weren't sure at first that they were real.  We thought they were sculptures...until they blinked! 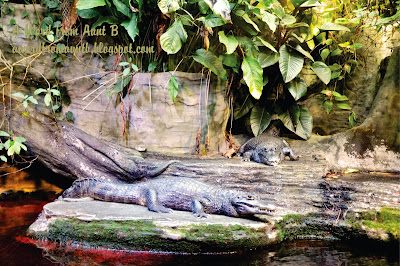 This bundle of fur is a sloth.  He was snoozing high in the canopy in the Amazon exhibit.  We were amazed that he was able to sleep so soundly without falling from that narrow branch. 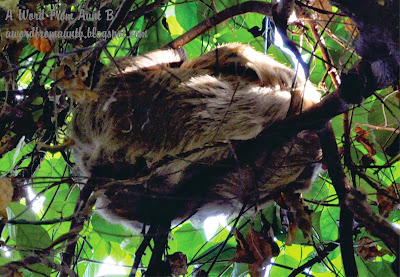 As you leave the Amazon exhibit, you enter the reptile and amphibian hall.  The aquarium is part of a frog recovery program that raises endangered species for re-release into the wild, but the display also showcases a number of more common species.

This bullfrog is actually a cautionary tale.  Bullfrogs were brought into our area by an entrepreneur who hoped to raise them to market to the restaurant trade.  They escaped into the wild and are now considered an invasive species, eating all sorts of animals - even ducklings! - and having no predators to keep them in check. 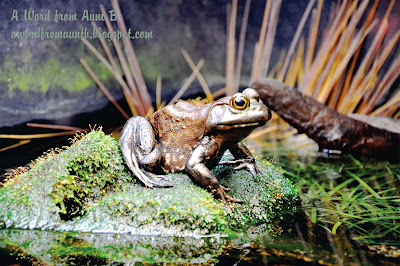 These leopard frogs are a happier tale.  They thrive at the aquarium and are being used to repopulate wild stocks. 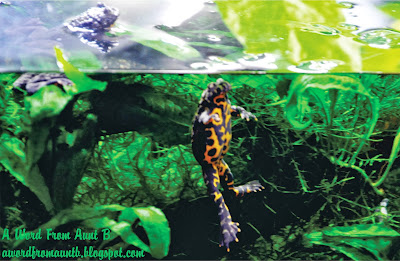 Of course, no aquarium would be complete without marine mammals.  The Vancouver aquarium no longer keeps orcas, nor do they require that their marine mammals perform tricks for aquarium visitors.  They do, however, keep beluga whales and successfully breed them, and their marine mammal rescue program means that white sided dolphins like this one are almost always present. 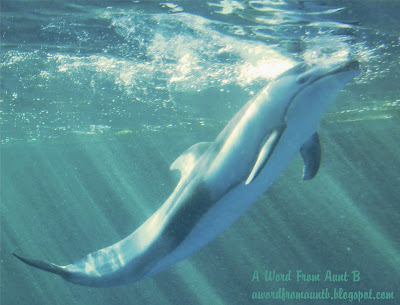 Other marine mammals on site include harp seals, and sea and river otters.

I enjoyed my day at the aquarium very much.  I hope you enjoyed my visit too.

Special thanks to my sister, Alane, for taking me on to the aquarium and for so kindly posing in so many of my pictures.