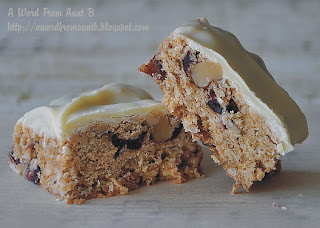 Every family has one or two go-to recipes that they use again and again, adapting them to the occasion as they go along.  My grandma's oatmeal bar recipe is one of those for me, and it forms the basis for this recipe.

The original oatmeal bar recipe was actually the crust recipe for a date square.  My grandpa was a plain cookin' guy, though, and didn't like the filling so ever thereafter my grandma made only the crust part of the recipe.  Even when completely unadorned it's tasty and pleasing, perhaps because of its very simplicity.

To make this bar, I used Grandma's recipe and mixed in chopped dried cranberries and walnuts.  Once the bars were cooked and cut I dipped the top of each one in melted white chocolate to give them a more "special occasion" finish.  They turned out great. 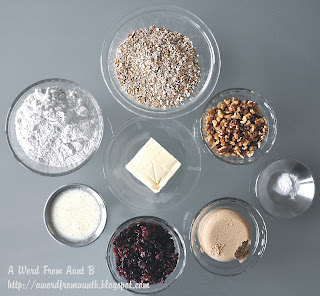 Cream together the butter and sugar until well mixed.  Stir in the milk.


Stir the rolled oats, flour, and baking soda together in a separate bowl. 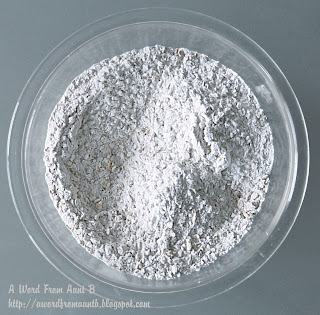 Add the flour mixture into the butter mixture and stir until well combined.  The dough will be quite stiff. 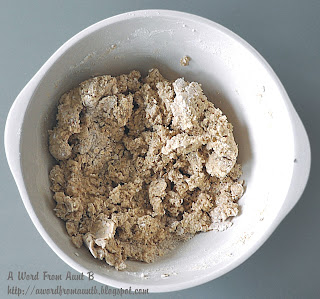 Add in the walnuts and cranberries and use your hands to mix them through the dough. 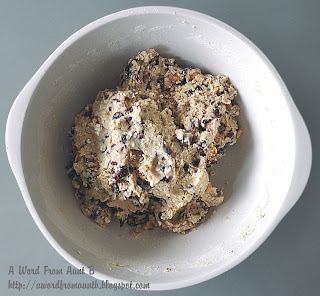 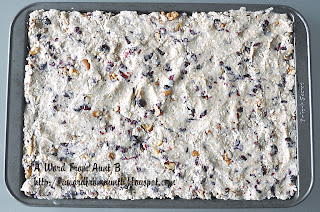 Place the pan on the middle rack of a 350F oven and bake it until it's lightly browned around the edges.  This takes 15 to 20 minutes in my oven. 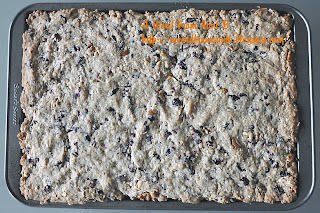 Cut the baked dough into rectangles as soon as it comes out of the oven, while it's still hot, then allow the bars to rest in the pan until cooled completely. 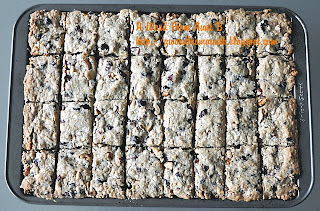 (It's a good thing the equal portion police don't visit my kitchen.  I'm not very good at cutting straight lines.  ;)

When the bars have cooled, chop the white chocolate coarsely and put it in a microwave-safe bowl.  Melt the chocolate in the microwave on the high power setting, in 30 second increments, stirring after each 30 seconds of cooking.

At the end of the melting time, you'll find some lumps remaining in the chocolate but enough ambient heat to melt them by stirring the chocolate without returning the bowl to the microwave.  This final stirring will help temper the chocolate.  The melted chocolate should look like this: 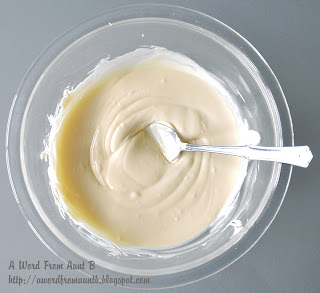 Working one bar at a time, shake off any crumbs then dip the top of the bar into the chocolate.

Place the dipped bars on a cookie sheet lined with waxed paper and allow the chocolate to set.

Once the chocolate has set, store the bars in an airtight container, with a sheet of waxed paper between each layer.  They can be frozen if you want to keep them for more than a few days. 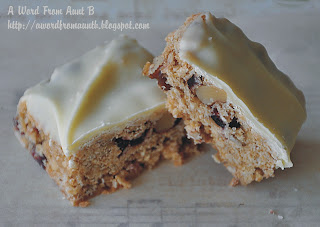 I love old family recipes and this one sounds absolutely delicious - perfect for Christmas, or any time really!!

Thanks April. That's what my husband said too. I can see myself making these well after Christmas is over. ;)