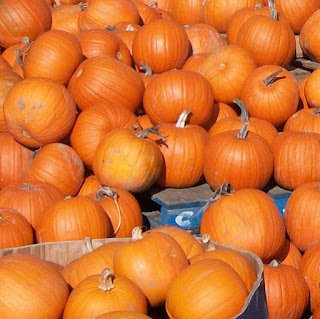 With Hallowe'en just around the corner and pumpkins for sale at every farm stand and market, pumpkin recipes are a big subject of discussion on line right now.

Many folks are asking "Why would I cook pumpkin? Butternut squash (and other winter squashes) are so much more flavourful!"

I thought I'd seize the opportunity to offer an answer to that question, and to share with you my little pumpkin secret.

It's true.  Pumpkins - especially the large ones sold for use as Jack-o-Lanterns - can taste quite bland.

So, why bother with them?

Because there's big difference in price between pumpkin and other winter squashes.

With so many people struggling to get by in these tough economic times, that difference in price is not to be taken lightly.

While it may not bring as much flavour to the party, pumpkin carries with it the same nutritional value as butternut squash (or other winter squashes).

For those of you who want to know these things, here are the nutrients contained in a single cup of mashed pumpkin.  (The rest of you can scroll down the page to find the promised pumpkin secret.)

When you're struggling to pay for food, it becomes very important that everything you serve provides the best possible nutritional value.  So, despite the somewhat bland flavour, it's high nutrient content and low price make pumpkin a desirable recipe ingredient.

The question becomes "How do we best use it?"

Use it as a vehicle to carry other big flavours, and to add moisture and texture to your dish.

Begin by roasting or steaming your pumpkin and then pureeing it in a blender or food processor.

Once you have made your puree, substitute 1-1/3 cups pumpkin puree for 1 cup of other liquid called for in a recipe.

You'll probably have to increase the amount of seasoning in your dish, but you can use this substitution in baked goods, sauces, soups, stews... You get the idea.

Used this way, pumpkin puree can make everything from a moist, delicious chocolate cake to a creamy, comforting macaroni and cheese.  It can help to stretch other, more expensive, ingredients over a larger number of servings, and you can take satisfaction from the fact that it makes your dish more healthful too.

So, that's it:  The pumpkin secret.

Ssshhh!  Don't tell my fella!  He would be so disappointed to know that there's veggie nutrition in that special mac and cheese...   ;)
_______________________________________
This post is linked to Gallery of Favorites hosted by Premeditated Leftovers and The 21st Century Housewife, The Pity Party hosted by Thirty Handmade Days, to Foodie Friday hosted by Rattlebridge Farms, to Foodie Friends Party hosted by Tracy at Busy Vegetarian Mom, Robyn's View, Marlys at This and That, Lois at  Walking on Sunshine, Lindsey at Family Food Finds, Cindy at Cindys Recipes and Writings, Michelle at  From Calculus to Cupcakes, Cynthia at Feeding Big, Jodie at Binomial Baker, R Dawn at Spatulas on Parade, Angie at A lil Country Sugar, Erika at Chef Picky Kid, Amber at Mamas Blissful Bites,

Great information. I have never tried to roast a pumpkin but my hubby really wants to, maybe next year! Thanks for sharing on Foodie Friends Friday!

I have never thought of using it instead of liquid in a recipe... I will have to try it. I do have a pumpkin that I should roast soon... Thanks for info and for sharing on Foodie Friends Friday.

Thank you for sharing this information and the secret! I knew pumpkin was good for you but I didn't know it was that good for you!! Great advice on hiding it too :)