Why I Broke Up With Kale 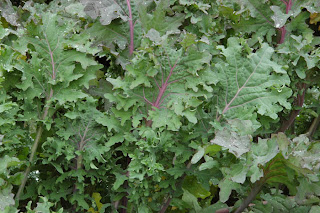 I used to like kale.  I bought it when I could afford it and, some years, grew it in my garden.  Last year, though, I grew to dislike it intensely.
Last year, my husband and I bought a CSA (Community Supported Agriculture) share in a farm here in the valley.  Because I was hoping to build a catering business, I purchased a large family share, reasoning that I could incorporate the beautiful fresh produce from the farm into my menus.
A friend of mine recently pointed out that if you want to make God laugh, you make plans. It certainly seemed that way at our house last spring.  I got sick and found myself unable to work.  I had to give up any hope of catering and was unable to work at anything other than my blogs for the next ten months.
For the months of our CSA subscription, this change in circumstance meant that we had a weekly supply of produce which far exceeded our needs.  We dealt with the excess produce from our CSA by sharing it with friends and family members and by donating some of the excess to the food bank.
Unfortunately our farmers were big kale enthusiasts and we ended up with huge amounts of kale every week.  No one in our circle wanted kale and I do mean no one.  Try as we might to find a home for it, we just couldn't give it away.
I strongly dislike wasting food so we ended up eating kale with at least one meal, every single day, for months.  I tried hard to vary the ways that I served it but both my husband and I got to a point where we just couldn’t stand to eat another bite or see another leaf of kale. We decided we couldn’t bring it home any more.
We’d offer our share of kale to other CSA shareholders who were picking up their vegetables at the same time we were, but many of them were tired of kale too.  It was often refused.  If we couldn’t give it away, we just left it at the farm.   I still regret the money wasted on produce not consumed but, even now, I can’t greet kale with any enthusiasm.
It’s a shame, really, that kale has worn out its welcome at our house because it’s very nutritious.  World’s Healthiest Foods rates kale an excellent source of vitamins K, A, and C, and of manganese.  It’s a very good source of fiber, copper, tryptophan, calcium, vitamin B6, and potassium and it’s rated a good source of iron, magnesium, vitamin E, omega3 fats, vitamin B2, protein, vitamin B1, folate, phosphorous, and vitamin B3.[i]
Kale is shown to help reduce cholesterol and to lower the risk of five different cancers.  Kale’s glucosolinates support the body’s detoxification system, and its flavinoids provide antioxidant and anti-inflammatory benefits.[ii]
Curly kale has been with us for a long time.  It’s a descendent of the wild cabbage plant and is believed to have originated in Asia minor.  It was brought to Europe around 600 BC by Celtic wanderers and, because it grows well in cooler climates, has been a significant part of European cuisines ever since.
Kale was an important food crop in ancient Rome and was widely cultivated by peasants and farmers during the middle ages.  The English brought it to North America in the 17th century.
Here on the island, our mild winters mean that kale can be successfully over-wintered, providing greens from the garden during winter months when little else is available.  This, of course, explains its attraction for our CSA farmers.  It also explains why, when I went out to visit our new allotment garden last week, I found that the previous garden plot holder had left behind a crop of kale.
The question now is if my frugal nature and good nutritional sense can overcome my previous overexposure to this healthy vegetable.
Do you have any favourite kale recipes?  If so, please share them with me.  I’m seeking inspiration.
[i] http://whfoods.org/genpage.php?dbid=38&tname=foodspice#nutritionalprofile
[ii] http://whfoods.org/genpage.php?dbid=38&tname=foodspice#nutritionalprofile
[iii] Both ornamental and dinosaur kale are much more recent varieties. Dinosaur kale was discovered in Italy in the late 19th century. Ornamental kale, originally a decorative garden plant, was first cultivated commercially as in the 1980s in California.
[iv] photo source:  http://wholefoodscooking.ca/rays-transformation-embracing-whole-foods/staying-the-course-its-about-discipline/
Posted by Aunt B at 16:07

Well, if you can't stand the taste of it (my favorite way is raw massaged kale, in a salad), then try putting it into a smoothie or pesto. :)

Good suggestions Elsa. I particularly like the idea of a pesto. Maybe I'll give it a try this weekend.

How about dehydrated Kale Chips -- Make a dressing of lemon juice, poppy seeds, garlic, honey and dijon mustard. Massage it into the leaves and then dry it in your oven or in your dehydrator. The kale gets crispy and you can eat it like potatoe chips, crush it and sprinkle it on salads, in mashed potatoes or rice, etc.

I'm so sorry you had to part ways with kale. I do hope you reach your desired reconciliation. I love your blog!

Thanks Angela. I'm glad you're enjoying the blog.

I've received so many good recipe suggestions that kale and I are now in counseling together and hope to achieve a reconciliation soon. ;)

I keep seeing recipes for fried and baked kale chips. Maybe if kale is in chip form, you'd be more open to keeping it.

I like to make copy-cat Zuppa Toscana like they sell at the Olive Garden, it's really good in that.

That sounds good Terri. Thanks for the suggestion.

I want to try fried kale...but so far I've been a chicken and just substitute spinach when a recipe calls for kale :/

I hope you do give it a try. Until I had to eat it every day for five months, I really liked kale. It has a much stronger flavour than spinach and can give real character to a dish.

Oh my, i can so relate to you! we have a weekly organic box that contains massive amounts of spinach for weeks now and very little else. have run out of enthusiasm by now (and my family never liked it in the first place). The kale suggestions you got sound lovely, especially the chips and the pesto.
btw, thank you so much for your lovely comment on This is it. i did answer it and send the email off and then realized that it is a no reply address. not sure how many of those i send off to you already :-).
here is what i wrote:

Thanks so much! I am very happy to hear that. Not because I like you being restless, but because it is so great to realize that these are completely normal feelings.
Hugs to you
Jutta


More hugs to you, have a wonderful Sunday!

I was grateful for those suggestions too Jutta. I have some very clever readers. I'm always grateful for the internet because it's such a great medium for exchanging information and ideas.