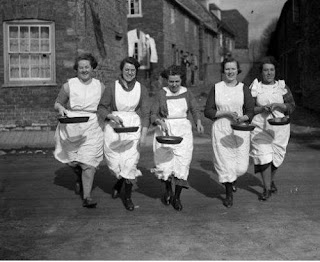 What does a group of English women racing down the street, tossing pancakes in cast iron skillets, have to do with the temptation of Christ in the desert?

At first blush, nothing at all.

But Shrove Tuesday is the day before Lent.

Lent is the season in the Christian liturgical calendar when congregants remember Christ’s forty-day fast in the desert.
Traditionally, Lent is a time when devout Christians give up certain luxuries.
Historically, those luxuries have included oil and butter, milk and eggs.
Prudent English housewives, not wishing to waste food, would use these ingredients to make pancakes the day before Lent.
Thus, Shrove Tuesday became known as Pancake Day.
The race?

Well, folk tradition says that a diligent housewife was so busy making pancakes that she lost track of time until she heard the church bells ring.  Not wanting to be late, she rushed out of the house, pan and pancake still in hand.
Whatever its origins, Pancake Day is our kind of observance.  We do love a good pancake supper at our house.
This Shrove Tuesday, we’ll be eating Pancake and Fried Egg Sandwiches, made with a fried egg between savoury pancakes flavoured with bacon and cheddar cheese, and served with a bright tasting pico de gallo. 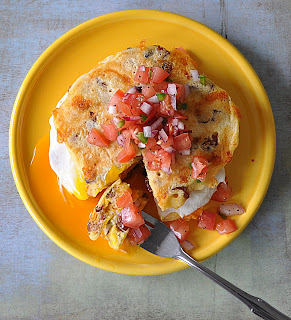 Here are the recipes so you can try them too. 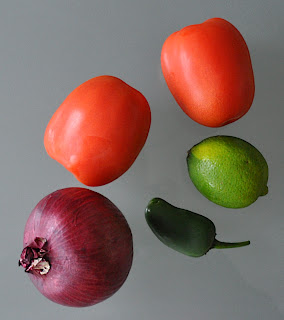 Dice the tomatoes and red onion in about a quarter inch dice.
Finely dice the jalapeño.  (We prefer our salsas mild so I removed the seeds and ribs from the pepper.  If you want more heat, leave them in.)
Chop the cilantro or parsley.
Combine the diced tomatoes, onion, jalapeño, and cilantro or parsley in a bowl and stir them together.  Squeeze the lime’s juice over the vegetables.  Taste and season with salt and black pepper.  Add more lime juice if you think the mixture needs more acidity. 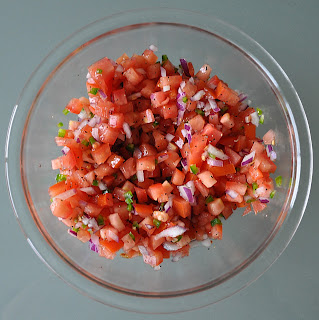 Set the Pico de Gallo aside to rest and let the flavours marry while you make the rest of the meal.
To make the pancakes, you’ll need: 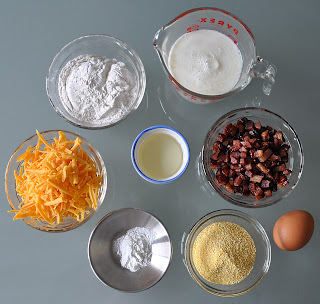 Beat the egg.
Mix the buttermilk, egg, canola oil, and cornmeal together, stirring until the mixture is very smooth and well blended. 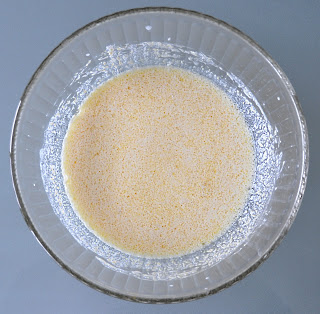 Whisk together the flour and baking soda.  Add them to the wet mixture, stirring just until the ingredients are combined.  The batter should be very lumpy. 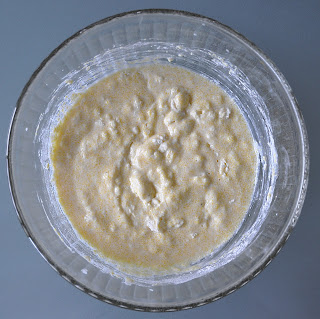 Add the bacon and the grated cheese and mix them through the batter. 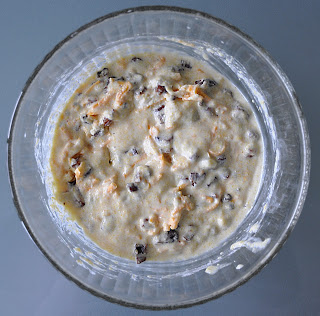 Ladle the batter onto a pre-heated griddle and cook at medium heat until the pancakes start to set around the edges and little bubbles rise to the top. 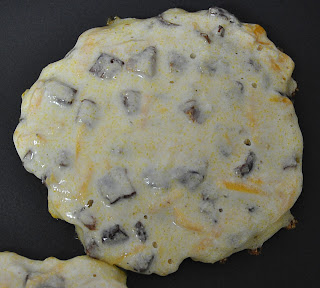 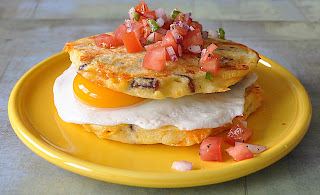 What a fun and yummy tradition!

It is good fun. :) Thank you for stopping by.