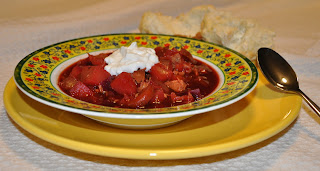 I made borscht tonight, or at least a variation of it.  It was ridiculously simple to make and very satisfying to eat.
Borscht came to North America with immigrants from Eastern Europe and from Russia.    There, it was often a vegetarian soup.  Meat was a luxury for much of the population.  Long winters and limited food supplies required that every bit of every vegetable be used, so vegetable trimmings were stored in a covered container outside the door, where the cold winter weather kept them frozen.  Just before the spring thaw the trimmings were used to make a richly flavoured and nutritious soup.  The ingredients varied regionally but could include beets, potatoes, cabbage, carrots and onions.
My purpose in making borscht this evening was to use up some of the leftovers from last night's dinner.  Preparation was simple and straightforward.  I sweated some onion until it was tender and translucent, then added the stock I made from the drippings and bones of yesterday's pork roast.  (Pretty nearly any stock except fish stock can be used to make borscht.  I've used chicken, pork, beef, and vegetable stocks with equal success.)  Once the stock was heated through, I stirred in some tomato paste--about 2 Tbsp. for 4 cups of stock.  When the tomato paste had been incorporated I tasted the stock and adjusted the seasoning with a little salt.

It's always best when making any vegetable soup to add your ingredients based upon how long they'll take to cook through. Tonight I added the beets first, then when they had started to soften a bit I added the potatoes.  The carrots and cabbage were cooked through last night so I added then just a couple of minutes before I served the soup.  I also stirred in about 1/2 cup of diced cooked pork.
I usually garnish borscht with a spoonful of sour cream dolloped in the middle of the dish.  It's mixed through the soup before eating.  Tonight I used plain yogurt instead.
I served the soup with simple baking powder drop biscuits, hot from the oven.  Here's the recipe:
2 c. flour (either all purpose or half whole wheat, half all purpose)
1 Tbsp. baking powder
1/2 tsp. salt
2 Tbsp. cold butter
1 c. milk (I used 1/2 c. water, 1/2 c. low fat evaporated milk)
Whisk together the dry ingredients, then cut the butter into the flour just as you would for pastry.  Mix in the milk until the mixture forms a fairly stiff dough.  Drop spoonfuls of dough onto a parchment lined baking sheet and bake the biscuits at 400 degrees until they start to brown and are cooked through.
So that's it:  borscht and biscuits.  Cheap, nutritious, tasty, and filling.  Did I mention tasty?  It was a lovely meal.
Posted by Aunt B at 01:22